Out now! NEXT LEVEL ROCK CHOPS 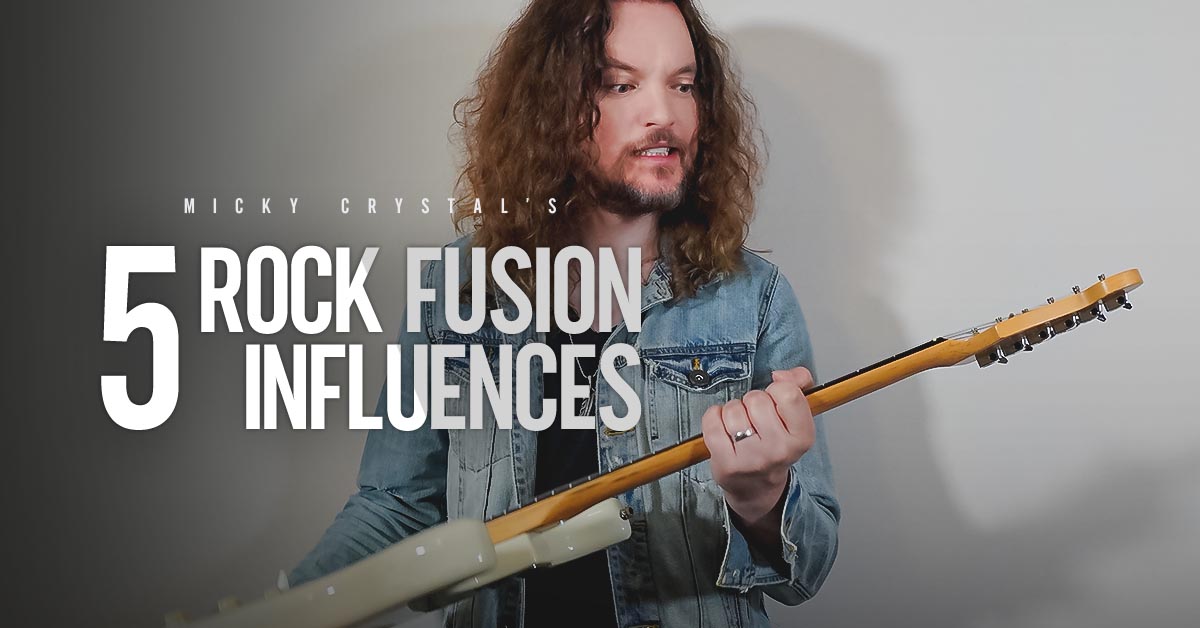 Micky Crystal’s InFusioned Rock Soloing was a chance for him to spread his wings and dig into a genre he loves.

Influences come in all shapes and sizes, and for every guitarist they’re different. So to discover the players who helped shape Micky, we spoke to Micky.

So in no particular order...

I first heard Robben through buying the “Tiger Walk” album on a total whim. I must have been about 17 or 18 and from there I sought out more of his albums and became a huge fan of the “Talk To Your Daughter” album in particular.

Robben was really the gateway for me to get into fusion. I was hearing chords that I’d not heard in the blues prior to hearing him and was amazed how he would throw jazz lines into blues progressions. It set me on the path to working on how to use the altered scale, diminished etc and how to incorporate them into my blues and rock playing.

Anything from “Talk To Your Daughter” but if I had to pick one track “Ain’t Got Nothin” But The Blues” is a jazz blues masterclass.

I first heard Frank on the Chick Corea live at Montreux 2004 DVD.

Studying Frank’s playing has had a huge impact on me, not only his economy picking but his note choice and his phrasing. I’ve learnt so much from listening to him.

I’ve always liked the “Passages” album in particular. “6.8 Shaker” really shows off Frank’s blues rock side. The trade off with the keys in the outro solo section is stunning, insane chops paired up with super cool bluesy phrasing.

I think it was probably a YouTube search that sent me down the rabbit hole looking for more and more of Scott’s playing. Vital Tech Tones, the first few Tribal Tech albums and the HBC album were on heavy rotation.

Scott is such a unique player in his melodic and rhythmic approach. His note choice and how he can take a simple idea, develop it and continue running with it had a big impact on me. The way he can incorporate outside playing and resolve on a blues lick was so impressive to me as I’d come from a blues background but had not heard anyone incorporate outside ideas like this before.

I’m a big fan of the first few Tribal Tech albums so it’s tough to pick one but let’s go for “The Necessary Blonde” from Tribal Tech’s self titled album. Super melodic with stunning changes.

I think I was 16 or 17 when I first heard Richie through listening to Mr. Big. I started to do some homework on him and his playing and was amazed he could go from playing with bands like Poison and Mr. Big through to Stanley Clarke with Vertu. Not only is he an incredible player but what an amazing voice too.

Once I heard the “Return of the Mother Head’s Family Reunion” album I began to really study his playing. I was heavily into country guitar playing around the same time so pairing up hybrid picking with legato seemed like a natural progression. The way he would approach arpeggios and tapping along with how he would use pentatonics have had a big impact on me as a player.

It has to be “Fooled Again.” The outro solo is incredible and still amazes me every time I hear it.

My Dad has a bunch of vinyl records of various guitar players from Hendrix through to Al Di Meola that he’d show me when I first took an interest in the guitar. There were some Larry Carlton and Steely Dan records in there too.

His melodic and rhythmic sensibility and he has this ability to play the simplest lick or idea that makes you go “why didn’t I think of that? That’s so cool.”

Anything from the “Last Nite” album and of course “Room 335.”