Behind the Pack: Professional Basics 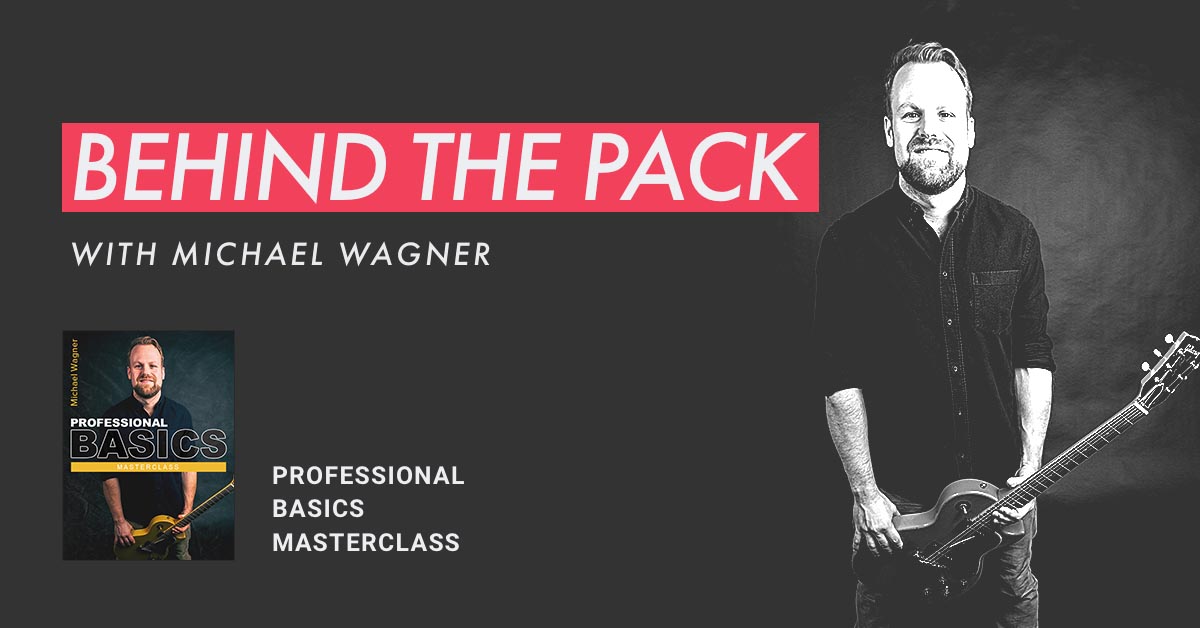 It’s a rare sunny day in the UK, and one of the JTC team starts chatting to Michael Wagner on Messenger about what’s in the works. “I have an idea for a Masterclass on the basics of being a pro” Michael writes. And so a release is born!

We like packs that solve a problem for players, and that is exactly what this one does. Michael has found a way to get the root of an issue, and solve it.

So here’s an inside look.

What was the inspiration behind this release?

There’s no shortage of JTC packages about lead playing. Picking, bending, sweeps, phrasing, scales…you name it, there’s a Masterclass. What I found out when teaching however is that a lot of people lack the basics – even when they have advanced knowledge about lead techniques. They could do the craziest licks but if you’d ask them to play a simple groove on a click, they’d have a hard time. This is the gap I wanted to fill with Professional Basics.

Because in the real world, simple stuff is what matters most. When you’re recording with a producer, you need to play consistently on any metronome or drum track, otherwise you won’t get called again. Same goes for playing with a good band. You also need to be fast finding the right voicings for a guitar part, so your chord and fretboard knowledge needs to be spot on. That’s why I focused on these three aspects in this release. There’s also lessons about lead playing, but always in the context of a more holistic picture of the guitar.

What is the major takeaway for the release?

Simple things can be the hardest. For example, recording on a metronome when you’re not used to it usually is a very humbling experience. Some of the click exercises in Professional Basics took me months to master. Originally I had to practice it for university exams, but it paid off in ways I couldn’t imagine. Since I’ve worked my way through this stuff, I never had problems working with any producer or band. Today, especially during the pandemic, a big part of my income is recording guitars from home. Without the skills I teach in Professional Basics, I wouldn’t be able to do that.

Is it a topic you could build on?

It took a lockdown and the total absence of a social life to find the time to record these lessons, so probably not! But seriously, I think I got the basics covered with this package. Of course there’s a lot more skills any professional musician needs; knowing your gear, knowing your DAW, being reliable, building a network…but I feel there’s enough material out there about those topics. All about the playing aspects that I really felt had to be in a Masterclass, I put into Professional Basics. And I’m very happy about that!

Major Issues is such a tune! Any plans for an album?

Thank you! As far as the instrumental tunes go, not yet. So far, I’m happy to release all of those one by one on JTC. If I’d work on an album, it would probably be one with vocals and a complete band! But hey – never say never.

A lot is made about your tone, in a nutshell, what’s your set up?

One of the blessings of the lockdowns was to have the time to dig into the gear part. In spring of 2020, I was lucky to find an affordable Divided by 13 FTR37 amp and the months after, I spent a lot of time working my way through different pedals. Finding the right overdrive almost drove me nuts! But after months of purchasing and sending back drive pedals, I finally found my perfect match on Ebay. It’s an older version of the Diablo drive from the German company OKKO. It turned out to be the ideal complement to the sound of the FTR37. The last piece of the puzzle was a monstrous sounding 2017 Gibson 58 Reissue Les Paul in Darkburst, for which I traded in my older Les Paul that you see in “Electric Mud”.

So all in all, the signal chain looks like this: Les Paul –> OKKO –> TS9 Tubescreamer (turned on for the second half of the tune) —> FTR37 –> UAD OX Box with a 4x12 cab –> Logic. There I use the Soundtoys Sie-Q and Echoboy plugins to sprinkle some sugar on the tone, and that’s it!

But I’m planning to do a detailed Youtube video on how exactly I used the gear for “Major Issues” in the near future. Because the secret of a good tone is not to buy tons of expensive stuff and throw it all together, but knowing how to use what you have!

And what’s next for you at JTC?

Professional Basics was a lot of work and for now, I feel like I’ve run out of Masterclass topics. So probably I just write a nice new tune and pack it up in a 20 Licks or Learn to Play package. After the gruesome exercises in Professional Basics, it’s time to go back to the fun stuff! ;-)

Check out Michael’s latest release below!