An interview with The Aristocrats 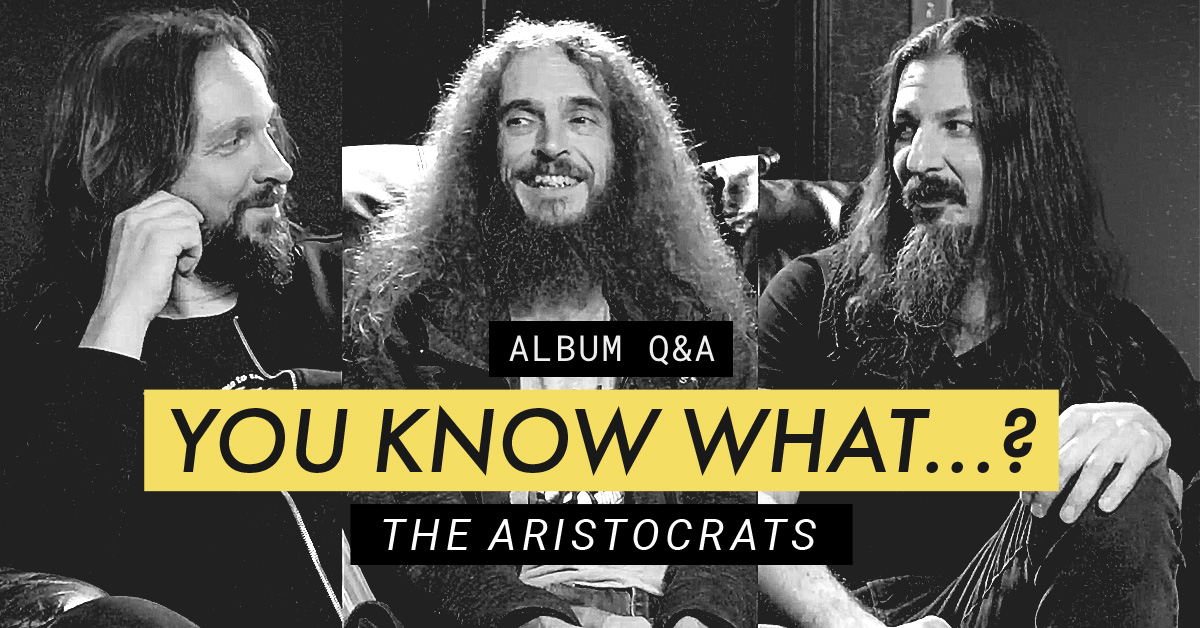 When it comes to musical experimentation, The Aristocrats are up there with the likes of Frank Zappa, Captain Beefheart and Pink Floyd. Yet what sets them apart is that in Marco Minnermann, Bryan Beller and Guthrie Govan, you have people at the very top of their respective games.

In You Know What…? they have created an enthralling, varied album full of fun ideas to learn and listen to.

So we spoke to Guthrie Govan, Marco Minnermann and Bryan Beller to get the inside track on this amazing piece of work.

Q: Do the live versions of the tracks differ much for the album ones and did you write them with performances in mind?

The Aristocrats: Inevitably the live performances and ”version” of the songs do evolve over time the more we play them, and we think that’s more a function of what we do as a collective musical entity rather than any particular song. Sure, a song like “Get It Like That” is more improvisationally minded than “The Ballad Of Bonnie And Clyde”, but even with those compositional differences accounted for, we’ll always try and find ways to make the live performances fresh and new.

Q: What part do you find the hardest to play?

The Aristocrats: We really try to focus on executing parts as a band. Sure, every song has its challenges for individual members. Guthrie wrote himself a fairly difficult part in “Spanish Eddie”, the bass chordal melody in “Last Orders” is tough, and Marco has to remember a lot of little things in “The Ballad Of Bonnie And Clyde”. But most of the time the challenge for us is making sure that we can execute things as a unit, and making them sound good. Sometimes that’s more difficult to pull off than just executing a single difficult part, even though we do want to get our own parts right, of course. As a unit, performing live, from this album, the flamenco/metal section of “Spanish Eddie” is probably the biggest challenge in that regard. There’s a whole lot going on there, and we do it in every soundcheck to make sure it will work. Perhaps the jazz section of “When We All Come Together” is a close second.

Q: Do you intentionally try and make the music challenging in terms of composition or is it a natural thing for you all?

The Aristocrats: We truly don’t try and make music “challenging”, even though we understand that some people appreciate it in this way. If we’ve done it right, it’s supposed to be something you can enjoy as well rather than something *only* to be analyzed and dissected, though that of course has its place for educational and musical growth purposes for anyone willing to dive in. Ideally there’s room for both! Also, humor counts as well. We’d rather have folks laugh and be entertained than try and “blow their heads off,'' so to speak. But again, we understand that they’re not mutually exclusive concepts, and Frank Zappa taught us that long ago.

Marco: I personally never think about musical influences whilst writing a song. Yet history and influences are probably subconsciously undeniable and become roots. The bands and artists I grew up on surely must have played a role. Queen, Led Zeppelin, Frank Zappa, Kate Bush, Kraftwerk, Ryuichi Sakamoto, Rush... and many more. But, you somehow learn the letters and words and start forming your own language and speak with own voice, which then maybe will stay in the universe to influence the next generations. I guess that’s important, the never ending road, haha.

Bryan: Just speaking for me on my songs, “All Said And Done” was definitely a Beatles pastiche, converted into an instrumental guitar trio arrangement. No hiding the ball there. “D Grade Fuck Movie Jam” was probably a lot of Jimi Hendrix as seen through the lens of Michael Landau. Perhaps a touch of early Van Halen snuck its way in there as well? “The Ballad Of Bonnie And Clyde” was the most curious one for me. I know the foundation of it was influenced by the Pink Floyd song “Sheep”, and I also realized we didn’t have any mid-tempo galloping rock shuffles in our repertoire. But there’s a whole host of 70s instrumental rock guitarists that probably influenced that one.

Guthrie: “Terrible Lizard”, just as you hinted, was intended to be my sonic representation of a huge dinosaur lumbering around: the glissando lick leading into the “chorus” was intended to mimic the way I imagined that one dinosaur might call out to another, whilst the intro riff was meant to be a crude representation of thunderous footsteps. “Last Orders” is an atypically mournful ballad, which could be taken to represent the general idea that good things don't always last forever - as symbolised by the “last orders” bell which you hear in a traditional English pub just before closing time! As for “Spanish Eddie”… I honestly have no idea where that one came from: the notes just kind of “coagulated” in my head for no apparent reason ;-)

Q: Were there any tracks “left on the cutting floor” that you might revisit later?

The Aristocrats: Not on this album. We generally write specifically for the band and agree in advance which songs will be on the album. Marco is the occasional exception as he writes more often, but this only comes up in terms of choosing which songs we eventually record. We’ve never, in the history of the band, recorded a track that we didn’t use. Make of that what you will. :-)

Q: For learning the guitar parts, what would your main piece of advice be?

Guthrie: I strongly suspect that most of the players reading this will already be familiar with the concept of taking things slowly and prioritising accuracy over speed… if you practice something slowly and perfectly enough times then increasing the speed will ultimately prove to be less challenging!

Thinking more specifically about this package of transcriptions, I would very much encourage players to take some liberties with the notes in certain sections, as the intentions behind the “written” and “improvised” sections in these songs were entirely different. I would say that the “verse/chorus” parts of each track in this package were very deliberately composed and would benefit from some detailed study. The “solo” sections, on the other hand, were all improvised and consequently they feature a few stream-of-consciousness passages where I was just “going for it” - hoping to convey a kind of explosive energy rather than any specific melodic content.

I wouldn’t personally want to memorise every last detail in those “crazier” passages and have to replicate them note-for-note so… I’d say that the way to get the most out of these transcriptions is to use your discretion when tackling the solo sections: it’s probably wisest to focus on learning your favourite licks note-for-note and then trying to look for any useful patterns in terms of note choices which seem to work particularly well over each chord, rather than feeling duty-bound to replicate every minute detail of the original!

In other words: some of these notes probably deserve more of your time than others ;-)

A huge thanks to Bryan, Marco and Guthrie for talking to us. For even an even more in-depth look, read our track by track review of You Know What…?