Get to Know: Connor Kaminski 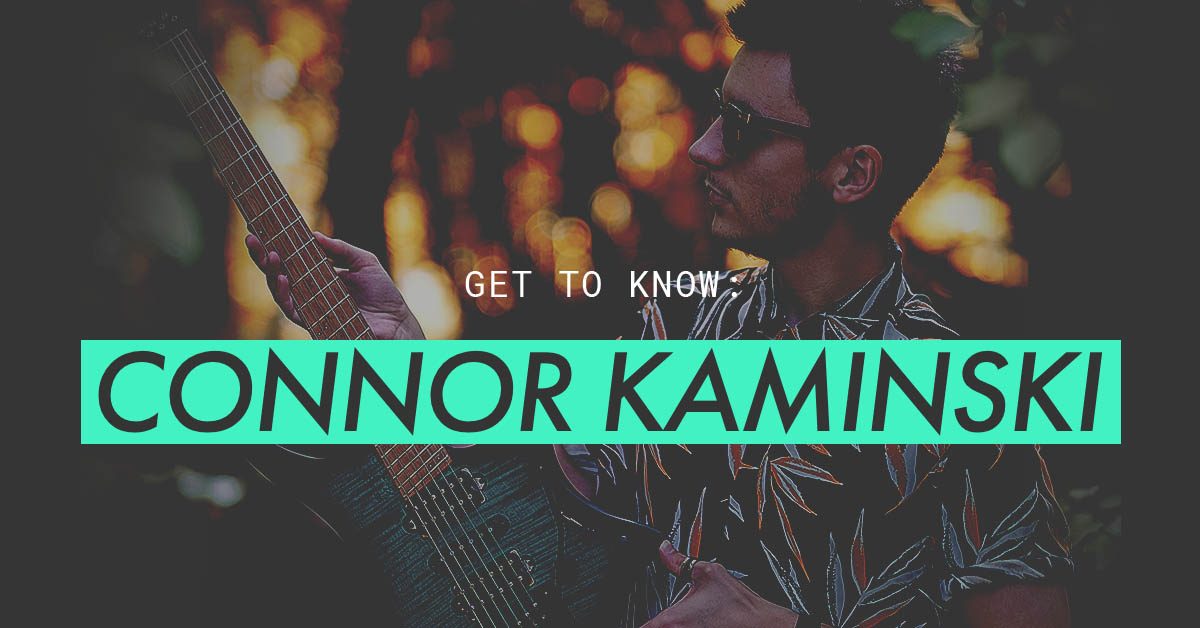 If you’re good enough, you’re old enough. That’s often the way with life, and Connor Kaminski is proof of that. At the age of 23, he makes his JTC debut with his “Learn to Play: The Haven” release.

Featuring a 15/8 intro, a bunch of chunky riffs and some very tasty shred, it’s a perfect balance of rhythm and lead.

But who is the young gun behind the groove?

How would you describe yourself as a guitarist?

For the past 2 or 3 years, I’ve been trying to approach the instrument in a much more balanced fashion. When I was younger, I’d utterly focus on speed and nothing else. While at the time, I figured that if I could shred, that meant I must be a good guitarist in theory… I have come to learn that was a wrong way of thinking about it. Now, I really try to use the guitar as a conduit to write truly emotive and meaningful music. I learned quickly that only guitarists/musicians care about a shredding guitar solo but many many more people care about a great, catchy melody. I’ve tried to harness that idea in my approach to guitar and songwriting especially for this EP. I only really start shredding if it serves the emotion of the song at any given point.

What was the inspiration behind “The Haven”?

The “Escapism” EP is about a day in my life. With “The Haven” being the last track, it’s about finishing a day's work and finally getting home to your peaceful place. It’s a celebration where we can claim back our own time to do what we want. That’s why it’s the most energetic and uplifting song on the EP. The end of the song closes out with the 15/8 repeating motif which directly links it back to the start of the EP, namely titled “Restart”. This is to signify that once we go to sleep and wake up again, the 9-5 work life repeats itself.

Is there a reason you went with the e flat tuning for the EP?

I was really struggling with writer's block in E standard and I’d been putting off changing tuning on one of my floating trem guitars for the longest time. It got to a breaking point where I realised two things: it’s really easy to change tuning on a floating trem if you follow the correct steps and second, I could write so much easier in Eb tuning. That’s when I wrote Restart and adapted the intro of Stir-Crazy to be played in Eb so I could finish writing the song. Noon Dreamer and The Haven were written a few days later over the course of a few weeks. I’ll probably stay in Eb standard for a while just for ease of playing the tunes live.

Having Nick play a guest solo on the record is an honour and he truly added his own flavour to the section of music I had in mind for a solo. He was super cool about playing a solo on my record! I remember waking up one morning checking my Instagram messages and I realised he sent me his finished guest solo. I remember smiling whilst listening to it in bed on repeat. To feature a wonderful guitarist like Nick on my music was a surreal moment!

Who are your biggest inspirations?

John Petrucci has to be number one, I don’t think I surprised anyone there. I’ve been a big fan of Plini and Intervals’ music for the longest time as well. Aside from guitarists, I think it’s important to allow yourself to be inspired by things outside of guitar and music. When you let that happen, that’s when the magic and originality happens. I tried to use my daily life as a source of inspiration for my new EP and it eventually became the centre concept of the entire record.

I think Mateus Asato is otherworldly and can embed such raw emotion in his playing that I find mesmerising. I also really dig Lari Basilio for her insane phrasing!

You are still very young and have already made a name for yourself. What plans do you have for the future?

I plan to keep growing and to prove myself to people that might not have heard of me yet. My plans for the future are to increase my listening audience and to get out there and play some live shows perhaps in 2021! Perhaps keep the new music dropping along the way as well as some top secret JTC packs, who knows!

Watch the playthrough of "The Haven" right here.