The Aristocrats: You Know What? (Album Review) 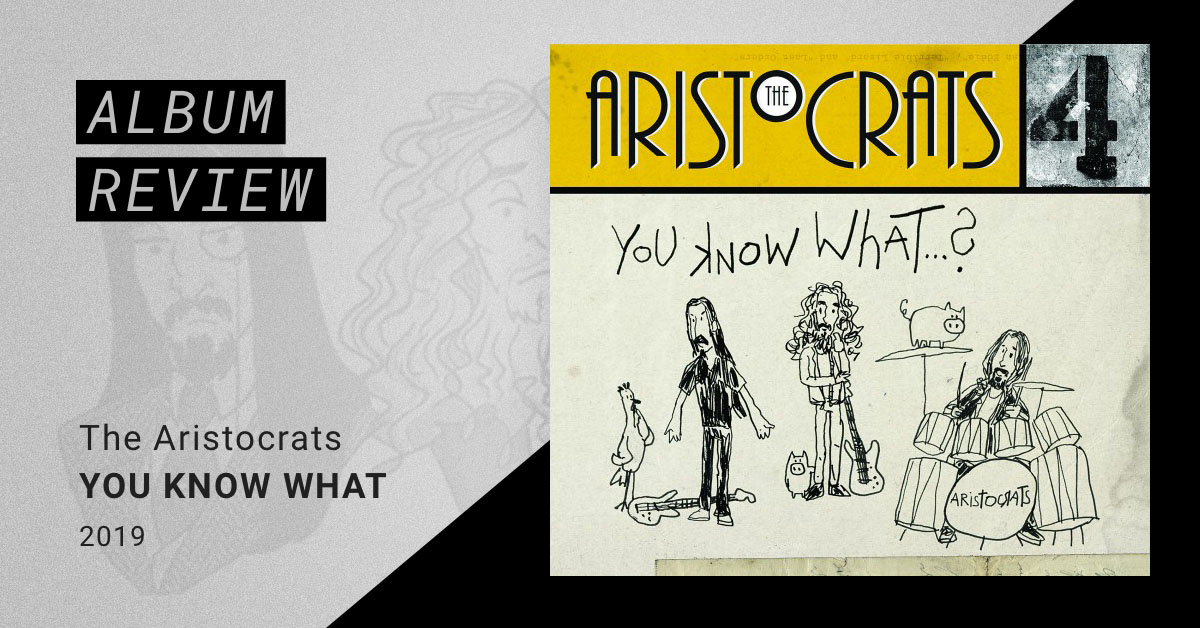 4/4 time signatures and solid backbeats have laid the foundation for most of the music we love today. But with a group of high-calibre musicians like The Aristocrats, it seems only right to throw out the rule book and create inspiring music that entertains and defies logic

The avant-garde prog-rock supergroup, made up of guitarist Guthrie Govan, drummer Marco Minnemann, and bassist Bryan Beller are known for pushing boundaries. With their latest album, You Know What?, they do just that.

Full tab/notation, with backing tracks, will be available at JTC Guitar in August. While we take on the daunting task of transcribing You Know What?, let’s see what Guthrie has to offer with a track by track review.

This peculiarly named track starts off in a Band of Gypsys era Hendrix, but then takes an interesting shift into Mahavishnu territory, thanks to a dark spiralling melody. The rhythm chops are mostly accessible to intermediate players, but as you’d expect, Guthrie’s solo cranks things up a notch or twelve.

One for old-school fusion fans. Guthrie weaves some bubbly clean legato lines over a very Chick Corea-esque progression. The whole track is awash with cool harmony and rhythmic ideas, and even the solo offers plenty of bluesy jazz inspiration for intermediate players. The final section features the flamenco-meets-early-Metallica mashup we've all been waiting for.

When We All Come Together

Guthrie is in peak twang mode here with some seriously grunty baritone low notes. We then move into completely different territory with a rather divine chordal middle section featuring some very challenging time signatures. Maybe brush up on those odd time signature licks before taking this one on.

All Said and Done

Amid the crazy rhythms and breakneck tempos of this track, a lovely little melodic major-key tune. There is lots for everyone to learn in here, especially the fine art of playing melodically through chord changes.

Guthrie at the forefront in this one. Gnarly power-chord riffs with rhythmic displacement to keep you on your toes. After that, we have a bit of wah to play with during the solo; always fun.

After some mysterious phrygian dominant riffs, Guthrie settles into a lovely atmospheric solo section that could grace an ECM album. Jazz fans rejoice.

The Ballad of Bonnie and Clyde

Another dark-sounding one with lots of crunchy riffs. This has a clear power-trio arrangement, ideal for ambitious players who want to learn the whole thing for performance. If you do play it live, you’ll have a classic Guthrie solo to contend with which blends Latin-sounding phrygian dominant lines with full-on blues-rock.

Guthrie's solo has some great slippery lines with lots of cool chromatic ideas. The track also has some meaty riffs for rhythm players too. Add in the jangly arpeggios, a lot of fuzz and some pitch-shifting effects and you have an off-the-wall track that’s a lot of fun to play once you’ve risen to the challenge.

The aptly named album finisher is the most accessible of the lot. This wistful tune has lots of slow dreamy chords and melodic single-note lines. The relatively simple harmony allows for lots of experimentation, which is great for intermediate and advanced players.

You Know What? is an ambitious album, and that ambition has paid off. Between all the madness, you’ll find yourself tapping your feet to grooves, sub-grooves and sub-grooves within a sub-groove. In the battle of “who plays best?” it’s fair to say they’re all winners, but from a guitar perspective, Guthrie’s riffs, leads and funk-filled tones really stand out.

Sign up below to be notified when we have full tab/notation available.